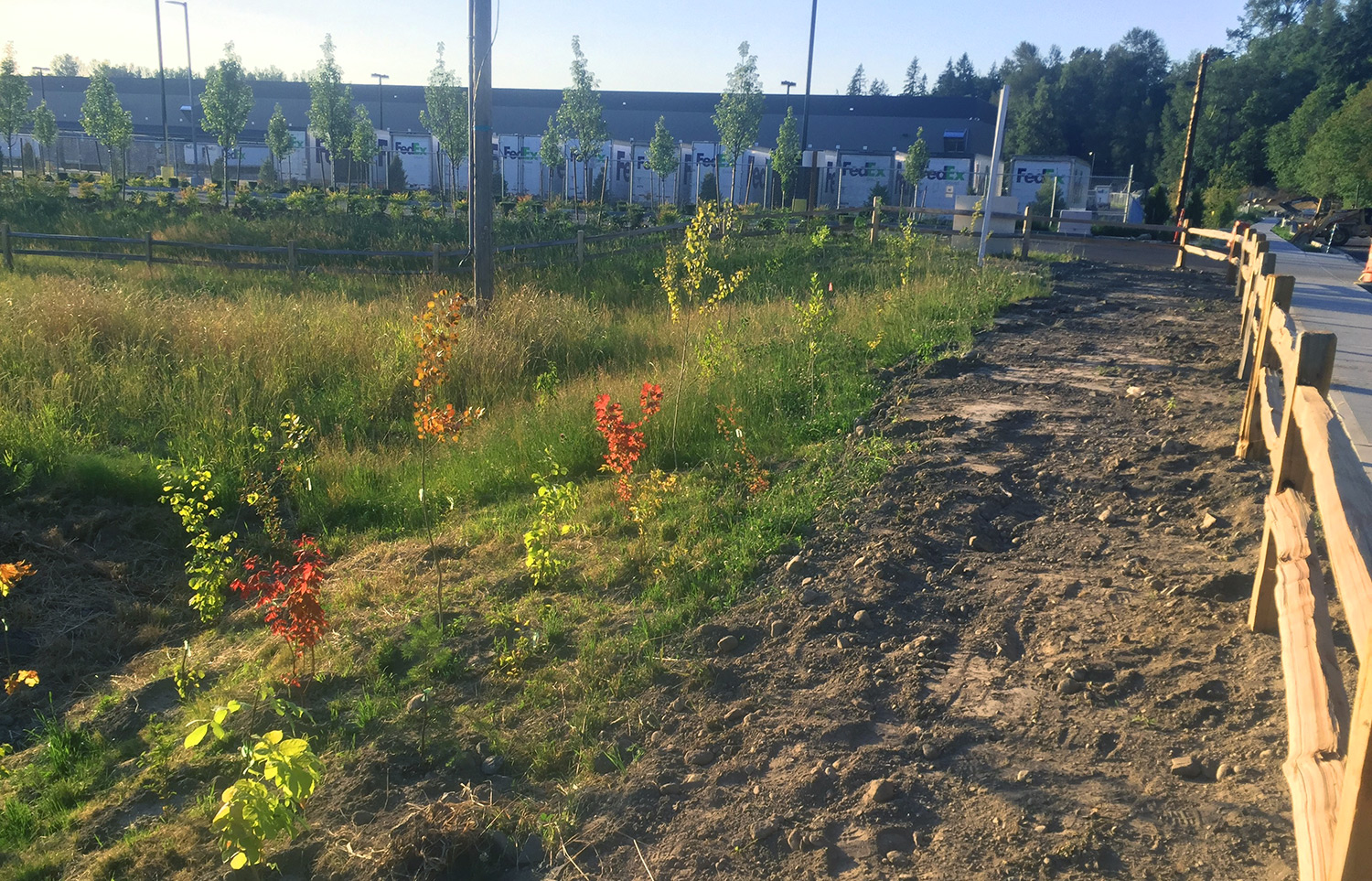 The Fife Corridor projects are bringing new commercial development, expanded industrial infrastructure, new businesses, and new jobs to the City of Fife and the surrounding area.  Soundview Consultants LLC was instrumental in assisting the property owners with environmental planning and approvals for wetland mitigation and stream restoration actions necessary to fulfill requirements for Federal, state and local permitting.  In addition to the construction of several new industrial  buildings, about two miles of the western side of Freeman Road East, between 20th Street East and Valley Avenue East, was widened to allow improved circulation for heavy truck traffic and residential access to new homes being built in the area.

Before development, the Freeman Road site was predominantly flat land used for agricultural purposes. The area contained several wetlands and their associated buffers.  Both Wapato and Surprise Lake Creek, which flow through the area, were heavily disturbed.  The stream beds had been artificially straightened and channeled through drainage ditches that had degraded over time and had become overgrown with reed canarygrass, Himalayan blackberry and other non-native, invasive species.  Culverts in the area were clogged with reed canarygrass and silt that interfered with fish passage. 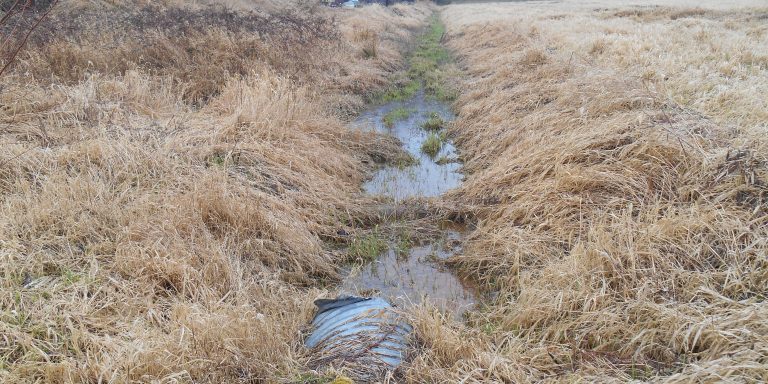 The flow of Surprise Lake Creek had been rerouted across the site. This photo shows the poor condition of the ditches which were clogged with invasive reed canarygrass. 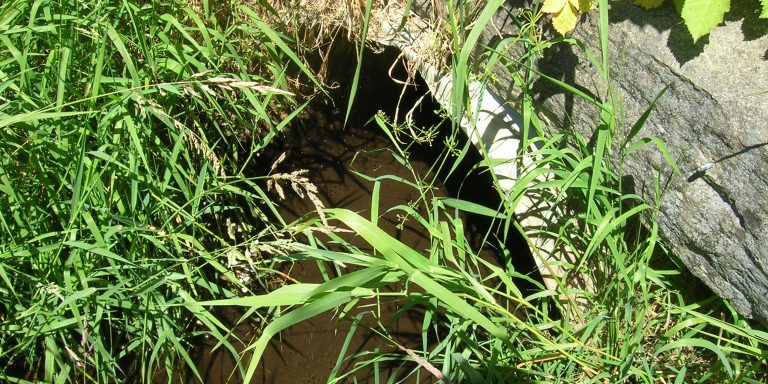 This close-up view shows reed canarygrass and silt blocking the flow of water through the culvert. This makes passage for fish very difficult.

Improvements to Freeman Road and the site development plans were designed so that impacts to the wetlands were kept to a minimum.  Invasive plant species such as Himalayan blackberry and reed canarygrass were removed from the area within 50 feet of the new road alignment. The area was replanted with native trees, shrubs, and herbaceous species.  Reed canarygrass was also removed from the 100-foot wide stream buffer and more than 86,000 square feet of stream buffer was replanted and enhanced with native trees, shrubs, and herbaceous species.  The old culvert under Freeman Road and an instream culvert were carefully removed to avoid disturbing sediments or depositing fill within the stream channel. They were replaced with new “squash” culverts to provide easier passage for fish along Surprise Lake Creek. 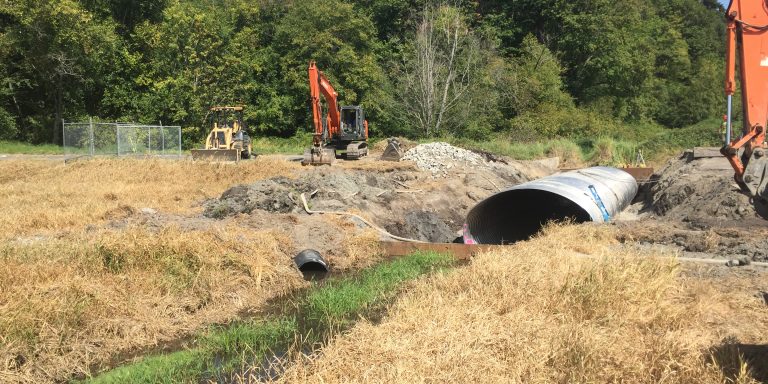 Squash culverts provide a larger opening near the bottom of the pipe. Because the culvert spans more of the stream channel, the velocity of the water is lower. This makes it easier for fish to reach spawning areas upstream. 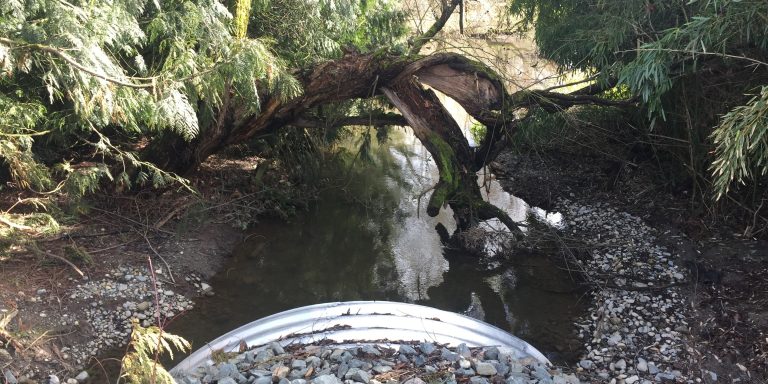 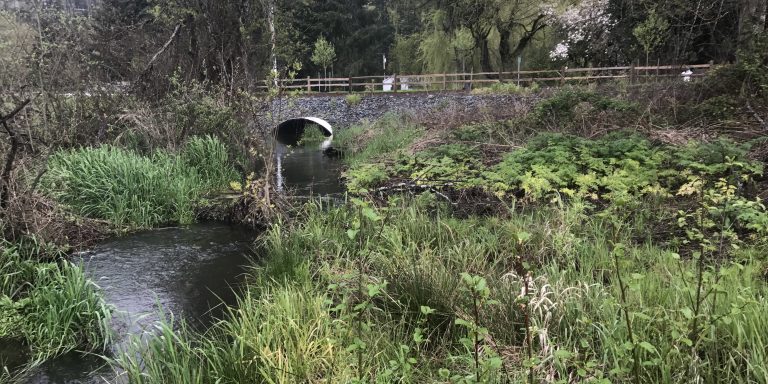 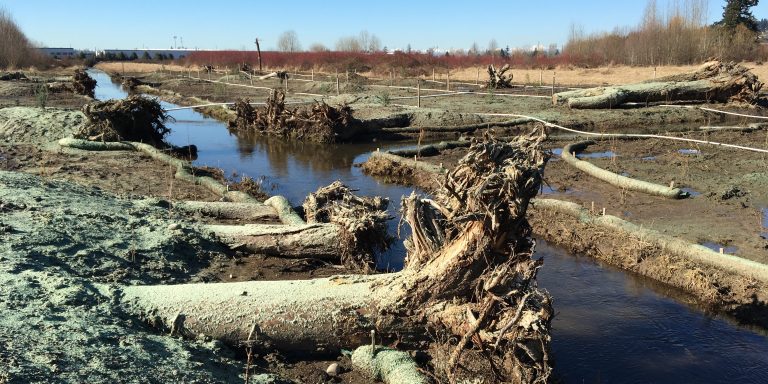 Large woody debris was anchored to the bank of Surprise Lake Creek, then the area was hydroseeded with native grasses. The large woody debris and new plantings will enhance the meander of the stream bed and provide new fish and wildlife habitat. 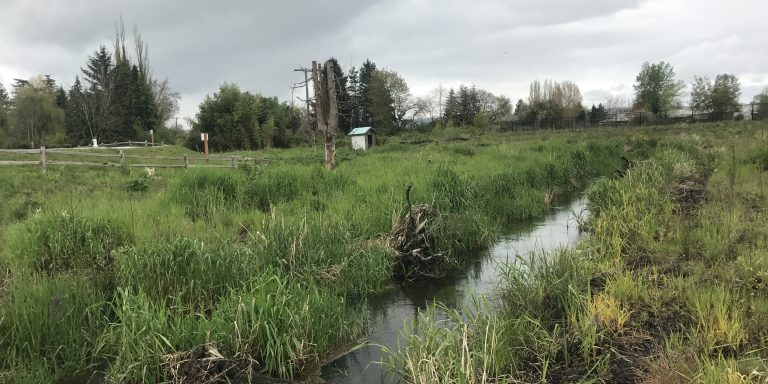 This view of Wapato Creek shows the growth of native grasses along the stream and its buffer.

Retaining walls were installed between Freeman Road and the wetland and Surprise Lake Creek mitigation areas to provide additional protection to these natural resources.  The enhancement and restoration actions improved channel stability; fish and wildlife habitat complexity; and restored native vegetation and habitat structures within the onsite portion of the stream and wetland buffers.

These voluntary stream and wetland buffer restoration actions improved fish and wildlife habitat, and improved water quality and flood storage conditions within Surprise Lake Creek and Wapato Creek.  The development of the Fife Corridor/Freeman Road site was regulated in part under local Critical Areas Ordinances overseen by the City of Fife and the Washington State Department of Ecology. Parts of the project required approvals by the Washington Department of Fish and Wildlife through Hydraulic Permit Approvals and by the United States Army Corps of Engineers (USACE) under the Clean Water Act for work in and around regulated water bodies.