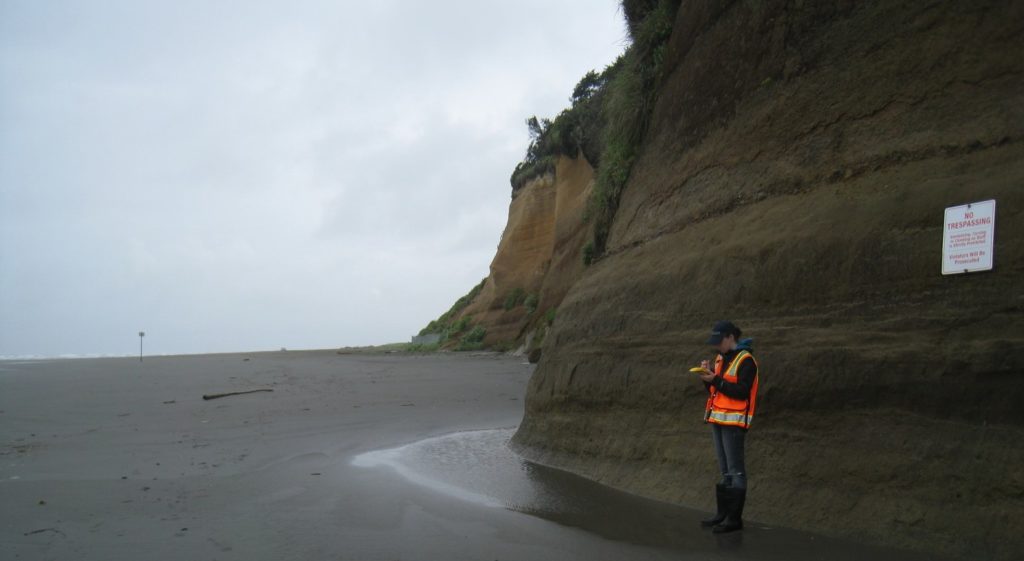 A popular family vacation resort on a high bluff overlooking the Pacific Ocean on the Washington coast has been in operation since it was built in 1908.  Many of the resort cabins are located adjacent to the bluff, some within 30 feet of the top of the slope.  Human activity on the bluff below the cabins was an ongoing and persistent problem for the resort.  People climbing on the bluff, carving inscriptions onto the surface, and digging caves into the slope caused erosion, multiple landslides, and damage to the shoreline environment. 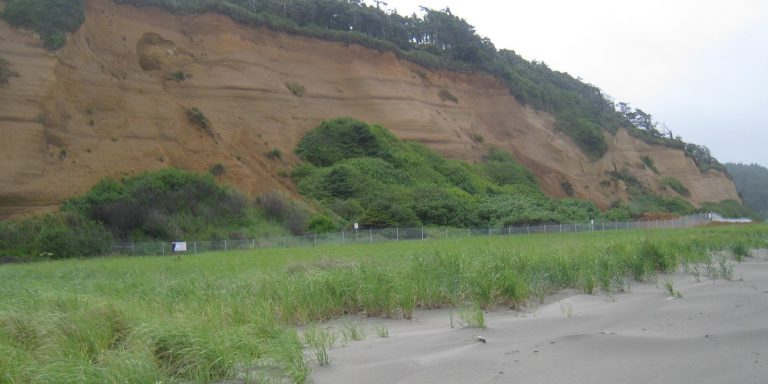 The bluff was an attractive challenge to adventurers on the beach who couldn’t resist climbing the steep face. For some the climb wasn’t enough and they dug caves into the bluff. A large cave and the resultant landslide can be seen on the left side of this photo. 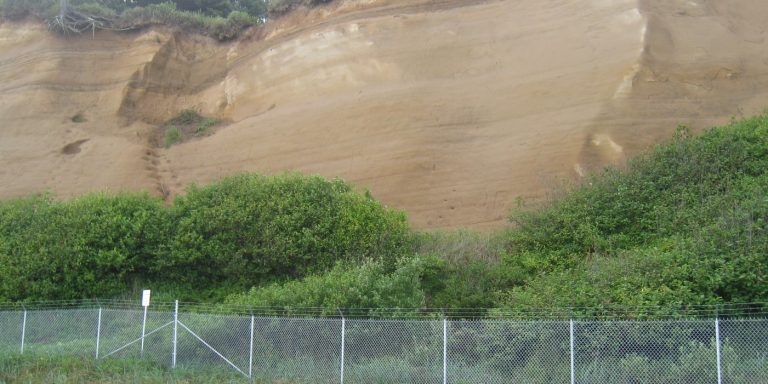 The tracks of climbers, smaller caves and another landslide area.

This activity was a safety hazard for visitors on the public beach area below the bluff due to falling rocks and soil, as well as for the resort structures above.  The resort tried to discourage trespassing on the bluff by hiring security guards and installing signage.  The last recourse was to install a high chain link fence at the base of the steep slope to try to prevent further damage to the bluff.  Unfortunately, installation of the fence violated the Shoreline Master Program (SMP) and the fence had to be removed.  Another solution to restrict human activity and its harmful effects on the bluff had to be found. 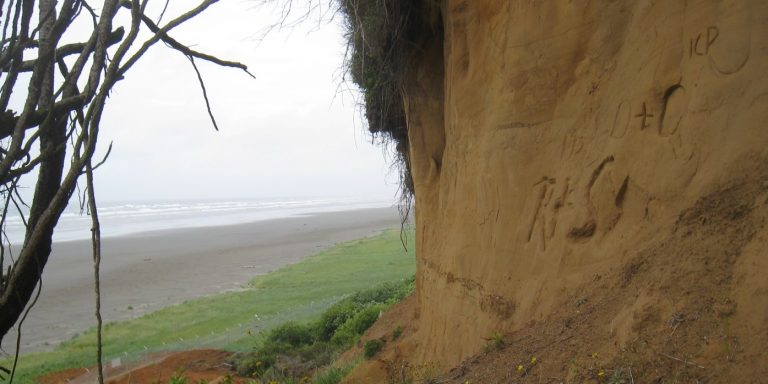 This photo shows how high up the bluff people would climb to carve graffiti. The fence meant to protect the bluff can be seen far below. The picture also shows the loose soils that make up the bluff. 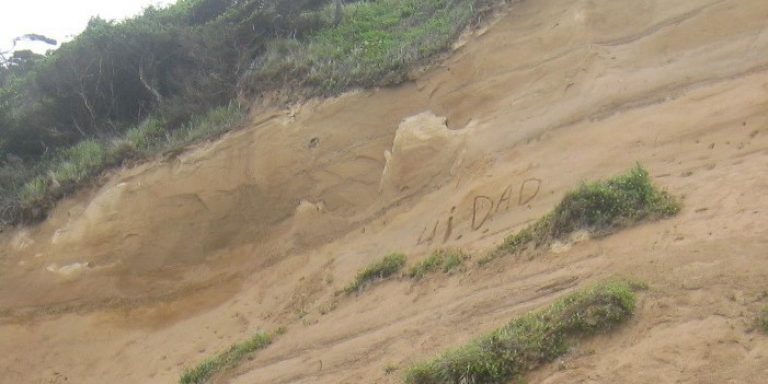 A climber’s message just below two soil outcroppings and the cave dug into the bluff behind them. Everything above the cave is unstable and is another potential landslide.

The resort hired Soundview Consultants LLC to develop a vegetation enhancement and restoration plan which would both minimize erosion and limit access to the bluff.  The bluff on the resort’s property was sparsely vegetated compared to other areas along the beach.  This made their property much easier to access, more attractive to trespassers, and more prone to erosion and landslides caused by illicit activities. 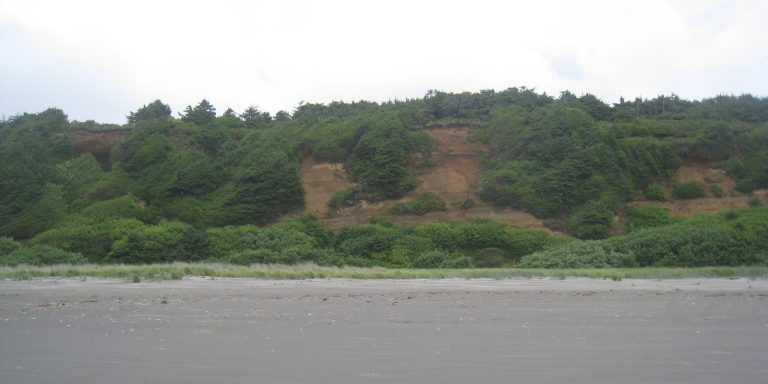 This bluff, immediately to the north of the resort, has enough vegetation at its base to discourage climbers. 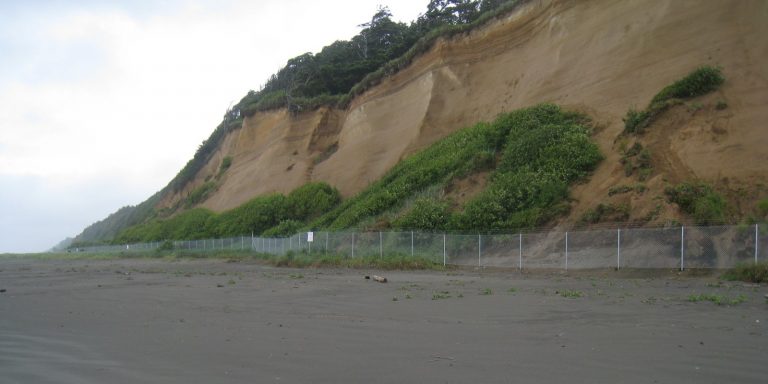 The lack of vegetation at the base of the resort’s bluff made the slope easily accessible to human activity.

The restoration plan that SVC developed called for the replanting of areas where large erosion or landslides had occurred (restoration areas) and spot-planting areas where vegetation was sparse (enhancement areas).   The restoration plan proposed that both areas be replanted with native shrubs and trees that either have sharp needles, thorns, or stickers and/or grow densely packed; plants such as nootka rose, devil’s club, salmonberry, wax myrtle and Sitka spruce.  The new vegetative plantings would protect the bluff from landslides and erosion by anchoring the soils and would provide natural protection that would discourage people from climbing on and digging into the bluff.  Additional installations of brush piles, large woody debris, and cautionary signage as needed, would also discourage intrusion on the bluff and retain the plantings in a more natural manner than the chain link fencing provided.